Adrenal fatigue is associated with constant and overwhelming stress. Often people complain of being tired, feeling exhausted or run down and physically and emotionally stressed. In an attempt to address the problem, people will use excessive amounts of caffeine and sweets to keep their energy up.

What happens to the body when it’s overly stressed is fairly simple to understand. When the body is experiencing high levels of stress it produces lesser amounts of cortisol, a hormone released by the adrenal gland. Although the adrenal gland produces other hormones such as estrogen, adrenalin, and androgen; cortisol is the primary hormone of the adrenal gland with the goal of responding to stress by increasing production. Cortisol converts’ protein into energy.

Under normal circumstances when the body experiences stress or when there is a need for the “fight or flight” response, cortisol initially increases to the point of homeostasis and then decreases when the stress is relieved. However, if that stress is not relieved; cortisol continues to produce and the adrenal gland tires leading to adrenal fatigue, which in turn begins to fail in hormone production. 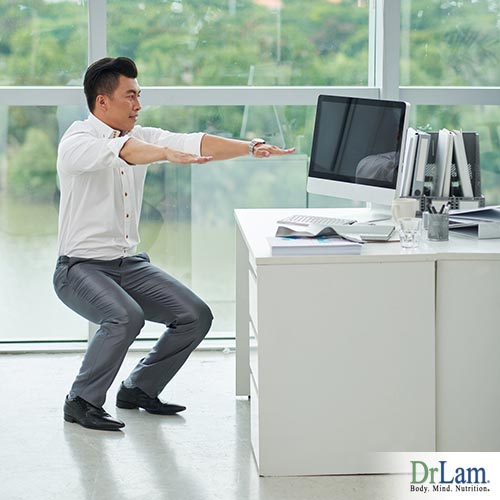 The effects on weight due to adrenal fatigue are multi-fold. First, because those suffering from adrenal fatigue seek to perk themselves up with caffeine and sugar; there is weight gain from empty calorie consumption. Of course, the big problem here is that weight will have to be lost at some point especially as we age and need to maintain better health for a longer and healthier life.

Increased or decreased cortisol levels are unhealthy for the body; remember cortisol converts’ protein into energy. When energy is unable to be produced by the conversion of protein to energy, the body begins to feel tired. If you are already stressed and lack the needed energy to exercise properly, weight gain is inevitable. Thus, adrenal fatigue is often considered a precursor to obesity.

More often than not, adrenal fatigue associated weight gain is concentrated around the midsection of the body; the waist and abdominal areas or what is commonly referred to as the belly area. The weight gain in this area is extremely hard to lose and is extremely tiring for the body to carry.

To address weight gain in this area, there will need to be a lifestyle change. Yes, this may sound scary and overwhelming, but it’s not as drastic as it may sound. Remember, when your body isn’t able to function properly you simply won’t feel well, not in the morning, afternoon, or night.

Adrenal fatigue can lead to depression, insomnia, belly fat, poor self-esteem, constant craving for empty calories, deficient digestion, continuous stress, poor digestion, and of course overall weight gain. Use these tips and tricks to get your adrenal fatigue and weight gain in check.

Don’t sweat those little annoying things in everyday life. Yes, sometimes these things are far more stressful than the bigger more important issues in life; thus, you must learn to deal with them, and it will benefit your health. Use meditation, relaxation tapes or take a nap.

Exercise is important in releasing stress, balancing hormones, and losing weight. The human body is designed to keep fit and to function at its most efficient levels possible. When suffering from adrenal fatigue take it slow when starting out with exercise; let your body adjust to the changes it will go through as it heals itself from the lack of the previous exercise. Increase slowly, but be constant and consistent. Don’t give up when results aren’t seen immediately; you will start feeling less stressed and healthier before you start physically seeing results; this alone will start helping to address adrenal fatigue. I would also suggest using a sauna to flush out environmental toxins, pesticides, etc.

Even though adrenal fatigue makes one crave salt and sweets and increase the use of caffeine and sugar to keep energy levels up to avoid it.

This may be hard at first, but keep up your efforts and before you know it your body will adjust to having these treats less. Next, remember, that the adrenal gland produces cortisol that converts protein into energy; thus, eat more protein and avoid starches to get that figure in shape and pep in your step.

You can help your adrenals by eating more omega fatty acids from fish such as salmon and sardines, dandelion, mustard or any other dark leafy greens as they contain vitamin A.

In addition increase your selenium intake by consuming smelt, herring, scallops and Brazil nuts. You can also use adaptogenic herbs to help in repairing the adrenal glands such as ginseng and Rhodiola. Item to avoid being gluten (get tested) and too much soy protein.